3 men arrived at 12pm sharp and were wrapped up in 5 hours. Our clients had a number of items also going from North Bondi to centralise storage in Rosebery.

Packing materials were provided to our clients three weeks prior to their move  which made things run more seamlessly.  They purchased a range of materials such as butchers paper, tape gun, large boxes and Porter ropes.  These items were delivered by Clark Removals to Paddington at no expense to the client.

Alex and Louis were extremely impressed with the services provided by Clark Removals.  They stated that the last Removalist that they had used, were slow and had damaged a number of their items as they had not taken any precautions . They were suprised that Clark took the required precautions with their  precious items and this was just all part of our standard service.

A couple of items also were taken from Paddington to Randwick to a friends place.

They clients said they would continue to refer us to their mates and choose Clark again. 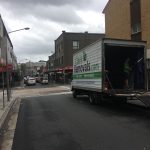 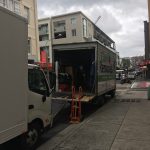