The VUE at 570-588 Oxford Street Bondi Junction has now opened. The VUE is a spectacular modern apartment building with 133 new spacious apartments. All the apartments are now sold, including the penthouse apartment called the Vuex.

Bondi Junction is now clearly well-established as a leading residential and retail precinct, a destination for all of Sydney. Cafes and high fashion. Exhilarating shopping and casual al fresco dining. Living at VUE means you can leave your car behind, if that’s what you want. The best of Sydney is all within easy reach and its only minutes to Bondi Junction train and bus interchange.

Its essential if you’re moving in and out of this modern apartment building that you liaise with the building manager. You need to book your move in at a time that is available at the apartment block. Residents are required to provide the building managers with a security deposit which is returned on the completion of the move. The security deposit is returned provided there is no damage caused to common property by the Removal company.

Reservation times for Residents and Removalists are in place to minimise the disruption to other Residents.

You should consider choosing Clark Removals for a move in and out of a modern apartment building as Clark is the preferred removals. Zak the owner of Clark Removals has personally trained his employees who will take care of your precious items. Clark also have all required insurances. Clark have public liability, workers compensation, transit insurance and accidental damage.

Clark Removals would like to thank Nick Perdikaris the Managing Director of Higher Living for recommending Clark Removals. We look forward to working with the building managers Anna, and Dimirtri from The VUE. 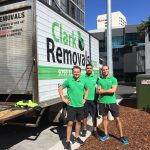 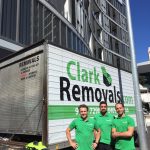